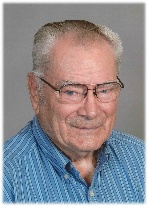 Robert Thomas Snorek passed away on Saturday, June 11, 2022 in the early hours of the morning, surrounded by his family, God brought Robert home. Robert was 90 years old. Visitation will be held on Saturday, June 18 from 9am-11am the St. Patricks Church in Shieldsville with Memorial Mass of Christian Burial at 11 am with Fr. Tom Niehaus officiating. Interment will be held in St. John Catholic Cemetery in Montgomery.

Robert was born on January 29, 1932 to Thomas and Rose (Filpek) Snorek in Erin Township. He attended country school and like many of the young men in that area, joined the Army Reserves for 6 years at the age of 17, to serve his country.

On January 27, 1953, Robert and Rita Turek were united in marriage at the Most Holy Redeemer Church in Montgomery MN. Eventually Robert and Rita bought his uncle Buster Snoreks farm and raised their family. Besides running the farm, Robert worked full time for 35 years at Nuttings Truck and Casting Company in Faribault MN. Robert and Rita worked side by side taking care of the farm, livestock and family. Many times Rita would start field work and have things ready so that Robert could take over after he came home from a full days work.

Robert enjoyed working and caring for his land, helping neighbors, playing cards, learning to play the concertina, wood working (Scroll Saw), family vacations, trips to Nebraska for Polka Days with Rita, Elenore and Alvin, deer camp in the fall, feeding the wild birds, exchanging recipes with his children, but his greatest love was watching and playing with his grandchildren, great-grandchildren and great-great-grandchildren.

Robert will be welcomed into Heaven by his wife, Rita of 60 years; his parents; Ritas parents; sister, Lorraine Turek, brothers-in-laws, Bohumil and Alvin.

Roberts family would like to thank the wonderful staff at Central Health Care in Le Center for all their excellent and loving care and the Hospital in Faribault.

Arrangements are with the Schoenbauer Funeral Home in Montgomery. 507-357-6116. On-line condolences may be left at www.schoenbauerfuneralhomecom.