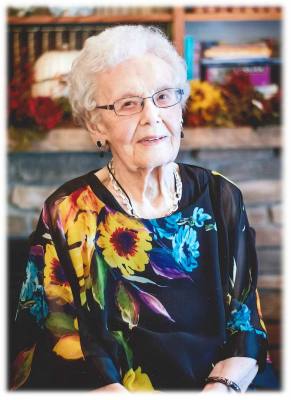 Crystal Augusta Krenik, age 104, formerly of Le Center and Cleveland, died on Thursday, November 3, 2022 at Benedictine Living Community, St. Peter, MN. Visitation will be held on Tuesday, November 8, 2022 from 9:00-11:00 with funeral service following, all at Church of Christ in Cleveland, MN. Burial will be at Greenwood Union Cemetery, Le Center, MN.

Crystal was born to Benjamin R. and Amelia E. (Ehmke) Sautter in Le Center on September 8, 1918. She spent her early years on a Lexington Township farm that is now a part of the Traxler Preserve. She attended District 11 school, skipping two grades. Her family moved to Le Center
in 1931, and she graduated from McKinley High School in Le Center in 1934 at age 15. After attending Teachers’ Training, she taught at District 75 for one year. She then worked at Spors Company in Le Center, a job she thoroughly enjoyed, until 1941.

On September 12, 1940, Crystal married Stanley E. Krenik of Cleveland at the Evangelical United Brethren Church in Le Center. They moved to a home on Lake Jefferson and spent twenty years there while Stanley farmed with his brother Jim. In 1960 they purchased a farm south of Cleveland and lived there until 1995, when they moved to Le Center.

Crystal, whose family was of primary importance to her, visited her children’s classrooms, often bringing treats or lunch, drove her children to numerous lessons and activities each week, and opened her home to her children’s friends. She also found time to volunteer in her community as a Cleveland Pioneers 4-H Club leader for 17 years, an original member of the high school Band Mothers Club, county chair for Easter Seals Society’s Camp Courage, and a member of the Cleveland Historical Society. She was active in the EUB/United Methodist Church in Le Center, the Le Sueur County Farm Bureau, and an extension group. In addition, she was a district sales representative for World Book Encyclopedias, and her many customers remembered her throughout the rest of her life.

After retiring in Le Center, Crystal volunteered with the RSVP School Reading Program, Meals on Wheels, the Food Shelf, the Le Center Old Settlers, and the Lake Volney Extension Club. She served as an election judge, played piano for programs at health care and assisted living communities, continued to be active in her church, and enjoyed entertaining her Snouse club and many others. She was a volunteer until the age of 94, when she discontinued driving. Crystal’s devotion to family life led to an interest in genealogical explorations, and she also delighted in sharing her memories with friends and relatives, including the writing of a memoir printed before her 100th birthday.

Crystal was preceded in death by her husband Stanley in 2006, her parents, her brother Dr. Robert Sautter, her sister Iris Westphal, her son-in-law Lawrence Hedlin, and Sautter and Krenik sisters- and brothers-in-law as well as nieces and nephews. She is survived by her daughter Vicki
Hedlin of West Des Moines, IA; son Brad (Susan) of Collierville, TN; son Doug (Mary) of Cleveland; and son Randy of Le Center. She is also survived by grandchildren Pamela (Michael) Morton and Laura Hedlin (Greg Katai) of Denver, Michael and Ryan Krenik of Collierville, Annie Krenik of Austin, and Christopher Krenik of Cleveland; great-granddaughters Alexandra and Madeline Morton of Denver; two cousins; and numerous nieces and nephews.

Memorial may be given to the Greenwood Union Cemetery Fund or the Le Sueur County Historical Society.

Arrangements are with the Le Center Funeral Home in Le Center 507-357-6116. On-line condolences may be left at www.schoenbauerfuneralhome.com.